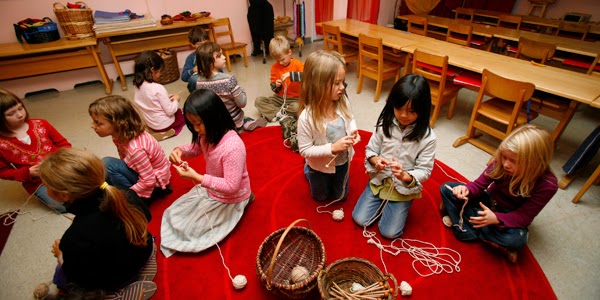 Here are some stories from around the net:

The alternative school's holistic, arts-based philosophy seemed like a perfect fit for my kids. Then I started learning about the eccentric mystical beliefs of its founder.

Editor's note: Names marked with an asterisk (*) have been changed.

May 26, 2004 | When Ted and Joan Shores* began researching schools near their Seattle home for their 4-year-old daughter, Clair, they settled fairly easily on the local Waldorf school. "We wanted a school that encouraged learning through play, instead of pushing formal academics," says Joan, who says that she was drawn to the school because of Waldorf's stance on electronic media (a no-no -- most Waldorf schools discourage the use of television and computers by young children) and nature play (encouraged -- Waldorf schools provide children with wooden blocks, simple cloth dolls, twigs, stones and other nature items rather than plastic toys). They were also excited to join the ready-made community of school families who pitched in with fundraising efforts, coordinated school events, and celebrated festivals together -- conventional holidays, like Christmas and Easter, plus celebrations centering on less-mainstream events, like the harvest, solstice, and May Day.

But the seemingly idyllic mix of a holistic education for their daughter and a supportive community for their family quickly soured: Clair began to be bullied by an older, bigger boy at school, and none of the staff seemed to notice. Though Clair was coming home in tears and no longer wanted to attend school, teachers dismissed Joan's concerns, she says -- even when she'd witnessed the bullying herself. "Our lead teacher kept asking what Clair's bedtime was, while insisting she never saw bullying at school," Joan says. "She would never address the behavior of the other child." (When called for comment, a representative from Clair's school said that no one had time to answer questions.) Instead, the teacher suggested to a frustrated Ted that he "read his Steiner."


Epinephrine i went to a waldorf school in germany when i was in grade 9 and it was one of the most horrible experiences of my entire life. i only stayed for 5 weeks and sneaked out to enroll in another school after i was told i couldn't go in a class trip because it would disrupt group cohesion. months later i found out that one of the students commited suicide in that trip.

the skeptic's dictionary has a nice article about that freak http://www.skepdic.com/steiner.html


Initial post: Aug 8, 2007 8:07:50 AM PDT
Mr. Sato says:
I've read and heard so many different opinions on Waldorf Schools it is hard to know what to believe. I'd like to have a direct communication with both students and parents of students who have attended or are attending a Waldorf/Steiner school. I am faced with deciding on a school for my own daughter, who is about to start kindergarten.

What is your opinion/experience?

Posted on Feb 25, 2010 9:22:40 PM PST
VA Mom says:
I would tread very carefully into a Waldorf School. Waldorf schools have a history of bullying. Anthro teachers and parents believe that it is wrong to intervene when a child or children bully another as it is karma working itself out. Also, teachers are hired without any real teaching credentials. Make sure your child's teacher has teaching experience appropriate to the grade OUTSIDE of Waldorf. Waldorf has strange ideas about teaching. Children are not taught to read UNTIL the 2nd grade. Children in the lower grades simply COPY from the board their main lesson. Math is very much de-emphasized and may be "officially" taught maybe 1 day a week. We matriculated my daughter from public school to a Waldorf school in 2nd grade. Her math and reading comprehension skills actually DECLINED. We pulled her out midway through 3rd grade and had her professionally tutored in math and language arts to get her up to speed with her peers OUTSIDE of Waldorf (meaning every other school out there, public and private). We paid a pretty penny to Waldorf to have my daughter's academics decline and another pretty penny to a professional tutoring company to bring her up to speed. After it was all said and done, we basically paid Waldorf to teach my daughter how to knit. She was also continually taunted by an anthro teacher's child.

I would stay away from Waldorf. The schools are not accredited by any other academic accrediting body other than themselves.
In reply to an earlier post on Feb 26, 2010 11:05:50 AM PST
Mr. Sato says:
Wow, took a long time to get a reply, but... anyway....
We did end up sending our daughter to a Waldorf school. Our experience was mixed. It is totally true what you say about academics, but that's part of a plan. At some point academics play a much bigger part and accelerate quite rapidly. Around 5th or 6th grade they are on par with other schools. Typically they far surpass other schools by 8th to 9th grade, when high school becomes a college prep essentially. Students who graduate from the Waldorf system tend to do VERY well in college, and often get accepted to ivy league colleges.

The problems we had that eventually caused us to pull our daughter out are:
1. The cost is very high. Tuition is only about 70 -80% of what you'll actually pay.
2. The time they want you to put in to help out is too great unless one parent doesn't work.
3. We weren't sure we could keep our daughter in the school long enough to benefit from their system. If we move to Japan (which is a possibility), she would be severely behind the other students, and there are no Waldorf schools in the Tokyo/Yokohama area.

We pulled her out after she finished kindergarten, and had her repeat kindergarten at the next school (private). There is a trend to start children in kindergarten later, so she wasn't the only one her age in there. She's much happier now with the level of challenge. She really was bored at the Waldorf school.

I don't want to say no one should send their child to a Waldorf school. But it should be left to parents who are entertainers, writers, something like that - who's schedules are largely their own, can afford the costs in time and money, and can stick with the program K-12.
Posted on Feb 27, 2010 5:49:02 PM PST
VA Mom says:
Mr. Sato.. You said: "Typically they far surpass other schools by 8th to 9th grade, when high school becomes a college prep essentially. Students who graduate from the Waldorf system tend to do VERY well in college, and often get accepted to ivy league colleges." Do you have any ACTUAL proof of this, or is this what your Waldorf school told you?


What are the disadvantages of Steiner/Waldorf schools?

Willow gave you some great answers!

Below are some links to websites that people have put up about their experiences in Waldorf schools. Most have to do with:

bullying (The Waldorf belief that being bullied and bullying people helps your soul through its incarnation process.)

lack of academics or weird academics (Waldorf teachers believe and teach such things as an ancient Babylonian spirit inhabits electronic devices and brings forth intellectual knowldege. This is why children are kept away from both during early elementary school. Then when they are older, children are taught scientifically incorrect things like islands are floating on the ocean, or there are 4 elements.)

racism- Steiner was a pre WWI German and has instilled in the Waldorf philosophy the idea that lighter skin, hair and eyes are superior.

lack of creativity- although there is a lot of art, music, and movement- it is all very scripted, right down to the specific color a child may use or the type of line he may draw at a specific age.

non-developmental- another thing that sounds weird when you first hear it because Waldorf teachers are always talking about things being "developmentally appropriate. The problem here is that their definition of the term is different from modern science's definition. As opposed to modern science's definition of developmentally appropriate being "when children's brains and have developed enough to be able to completely understand and preform the task", Waldorf's definition is "the age when Rudorf Steiner felt that an activity would help further the souls incarnation into the body."

Cult-like behavior- Parents are expected to continue Waldorf beliefs in their home, so no electronic devices-(TV, video games, Wii, movies,...), no reading to young children or books in general, only using "natural" toys, (wooden toys-dolls with no faces, beeswax crayons,..), no competitive sports, only allowing Waldorf doctors and medicine, no or few museums and festivals that are appropriate.... After a while the only people with whom a family can associate are other Waldorf families.

There's more, here are some links to it all...

Perth Waldorf School: The place where I spent some of the worst years of my life. The place where, yes, there were some nice people, but I met some of the meanest boys I have ever had the displeasure to meet. They teased me, they threw things at me, they made me angry just because it was funny, they lied to teachers so they wouldn't get in trouble, and they got away with it. You know why, because nobody cared! Not even their parents. THEIR PARENTS WERE SO IN DENIAL!
Posted by PeteK at 11:50 AM