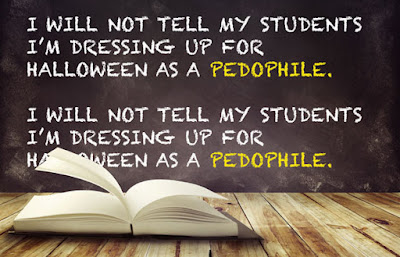 Gerard MacIntosh admitted to several bizarre incidents of professional misconduct while teaching Grade 8 students at Vancouver Waldorf School in North Van during the 2013-14 year, according to a Teacher Regulation Branch discipline agreement. The branch’s disclosure of the deal didn’t identify the school, however, The Province confirmed the incidents with school administrators took place there.
In one incident, according to the agreement, MacIntosh admitted he badly upset a girl who had been diagnosed with autism when she asked him for an eraser in class.
He held out a pocket knife in front of a group of students and told the girl, “Here, use this to erase your life.”

A former North Vancouver elementary school teacher and principal was suspended this week after he told one student to erase her life with a pocket knife and told others he had dressed for Halloween as a pedophile.  Gerard MacIntosh taught at an independent school where he made the comments during the 2013-14 year, according to a discipline agreement released this week by the province's Teacher Regulation Branch.MacIntosh had been teaching grade eight students in early 2014, when a student asked him for an eraser, according to the agreement.  In front of other students, MacIntosh held out a pocket knife and told the student – who had been diagnosed with autism - “here, use this to erase your life,” according to the agreement.  In a separate incident, a student asked the teacher if he was going to wear a costume at a Halloween party for grade seven and eight pupils.  “MacIntosh replied that he was already in costume, as he was dressed up as a pedophile,” read the agreement.  MacIntosh was also reprimanded for a third incident that happened when his grade eight students were to visit a grade 11 class. According to the agreement, he told the elder pupils he would bet money that a particular grade eight student would "say something stupid like ‘how do you get laid in Grade 9’?” - or words to that effect.  The school placed MacIntosh on paid leave in May.  He told some parents he was on leave because of some of his students.  And he told some of his students that he was on leave because of the pupil to whom he had held out the pocket knife, according to the agreement.
MacIntosh was teaching at the Vancouver Waldorf School at the time the incidents happened, confirmed Victoria Restrepo, a business manager for the Vancouver Waldorf School.  "We immediately began an internal investigation and reported it to the BC Teacher Regulation Branch Review Board,” said Restrepo in a written statement. "Our first priority is, and always will be, the health and safety of the children at our school."

Apparently the health and safety of the children wasn't the school's priority as there were three separate incidents with this person.

Another paper covers the story here:
And here: